Tamarind Institute presents a documentary highlighting a series of collaborations with three New Mexico artists, who all live and work within a 66-mile radius of the workshop. Each artist, Nina Elder, Tom Miller, and Judy Tuwaletstiwa, represent a unique response to New Mexico history, landscape, and culture.

This project is sponsored by The University of New Mexico Center for Regional Studies.

Screening at the Guild in Albuquerque
Saturday, August 5, 2017

1 p.m. followed by a discussion with the participants in the project

Screening at the Center for Contemporary Art in Santa Fe
Thursday, August 10, 2017

6 p.m. followed by a discussion with the participants in the project

Details to be announced.

Judy Tuwaletstiwa, Galisteo, New Mexico Drawing upon her innovative handling of glass and textiles, Tuwaletstiwa will explore ideas of printing on alternative printing surfaces. Her large-scale work is informed by the history of the atomic bomb, the Trinity site, and the intersection of ancient and modern cultures. A celebrated artist with a long career of artist residencies, exhibitions, and collections to her name, her work is the subject of a major monograph recently published by Radius Books of Santa Fe.

Nina Elder, Albuquerque, New Mexico A visual storyteller, photographer, painter, and adventurer, Elder represents a new generation of art making. She seeks out active and abandoned mines, Cold War military sites, and vast industrial landscapes to better understand land use and natural resources. Elder will create prints based on both historic photographs and organic materials from various mining sites, exploring the physical properties and impact of human productivity in the region.

Tom Miller, Santa Fe, New Mexico Tom Miller works in sculpture, painting, and video. He comes to Tamarind with ideas of materiality and surface that stem from his sculptural work. An elegant minimalism pervades his work, constructed from ubiquitous building materials such as cement block, plywood, and beams. Amidst the richly worked surfaces there is a subtle sense of tension, as he incorporates elements of instability and ambiguity within his architectural forms. His recent work explores the inherent properties of fences and walls, calling up political associations of barriers, division, separation, and security. His formal architectural language is understated, as are the low-key grays and deep blacks he favors. At Tamarind he will explore his sculptural ideas in lithography, relying on the broad possibilities of paper and surface for his constructions.

About the Video Producers

Melinda Frame is a Regional Emmy® Award winning producer, director, cinematographer, writer, and editor. She established her career as a documentary filmmaker in New York City working on projects for HBO, A&E, the Sundance Channel, VIACOM, as well as DISCOVERY before returning to her native New Mexico. For the last three years, Melinda has traveled throughout the Land of Enchantment filming the travel documentary series New Mexico True Television for the New Mexico Tourism Department. She has served as producer for past clients such as L'Oreal, Washington Mutual (CHASE), the James Beard Foundation, and Manzano Day School.

Nisa and Melinda on location

Nisa and Melinda in Galisteo 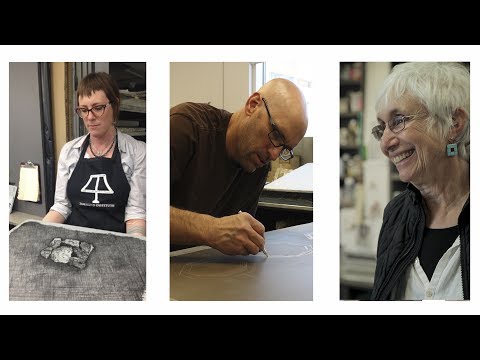